Birth of the Playground Project 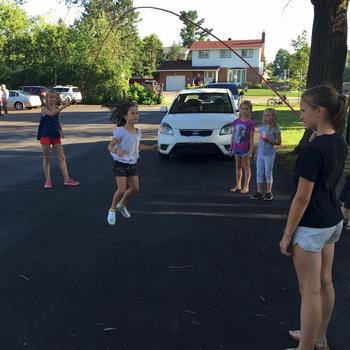 What we as parents remember from the playground may be disappearing and is certainly changing. Play is not just a lot of fun. It is crucial to a child’s physical and social development as it can also invite empathy, connection, belonging, mastery and so much more. If play is really disappearing, then should we be concerned?

Schools, as IICRD's Micheal Montgomery reflects, need more play to foster healthier relationships between children, parents and teachers. This article draws on Micheal's work with a school board, based in Gatineau, Quebec, Canada where he lives with his family.

According to Peter Gray in The Play Deficit, the equality of play is not the equality of sameness. Rather, it is the equality that comes from respecting individual differences and treating each person’s needs and wishes as equally important.

Over the past 10 years, I have increasingly become interested in this concept of play and its importance for both adults and children.

In my work as a facilitator with IICRD using the Circle of Rights, I have enjoyed our shared intention of integrating play into our core methodologies. In doing so, we have had lots of fun using balloons, tarps, ropes, laughing sticks, songs, games and so on.

But what is play, and why is it important?

“To engage in an activity for enjoyment and recreation rather than a serious or practical purpose. It's a state of being, purposeless, fun, pleasurable, for the most part focused on the actual experience, not on accomplishing a goal or outcome”.

For him, “Play is where we learn to be and remain human”.

For IICRD, the intention of using play comes from our belief that both adults and children learn best when playing, that play itself is critical to children’s healthy development, that playing together generates optimism and hope, that play makes perseverance fun, leads to mastery, fosters empathy and promotes a sense of belonging and community, allows difficult issues to be addressed, deepens connection and enhances relationships.

This focus was initially based on our shared experiences and intuition. However, over the last few years we have attempted to provide more evidence in our conclusions about why play is important for all of us.

In this short article, I want to acknowledge some of this evidence and describe some of my work with IICRD and an English School Board in Quebec that has flowed from this concern and these beliefs and findings.

As part of my work as a Consultant on Anti-Violence and Bullying Prevention in the spring of 2015, I had to do some analysis of school-based surveys across the 22 schools within our jurisdiction. One particular finding – that students felt least safe in the playground at recess – jumped out at me, as significant.

I have been thinking a lot about recess in schools with the Board because all the data from surveys and other sources is telling us that: recess is a difficult time for supervisors, teachers and students.

So I decided to try to observe what was happening in several playgrounds for a few weeks.

What I saw – which was very different from what I had experienced in my own childhood – concerned and prompted me to start thinking about childhood development and this disappearance of play.

Iona and Peter Opie produced a book in the 1960'/70's in the UK - Children's Games in Street and Playground. What they described reflected what I was seeing - Hop Scotch/ Skipping/ Clapping Songs - all disappearing from the street and playground.

Researchers, lead by Virginia Caputo, at Carleton University have also been looking at this in the Canadian context – and have come to similar conclusions: that play as it was known in the 50’s/60’s and 70’s has changed.

What does the evidence tell us about the changing nature of play?

In 2010, the International Play Association conducted a Global Consultation on Children’s Right to Play. Some of their finding included:

One of their key conclusions was that we need to raise awareness about the importance of play and the right to play with the general public, particularly with parents and teachers.

This prompted me into action: What if we worked with teachers and children to record what is happening in the playground? We could then get a clearer picture of what is currently happening in playgrounds in order to better understand why they are unsafe! And so we did - and found that cooperative and collaborative play which did not involve some form of violence was rare.

That in turn led to a discussion with the school administration about how we might positively impact this situation and make playgrounds safe again.

What if we worked with children and their parents to re-culture the playground with some of the traditional play activities?

These questions sparked the birth of the Playground Project. Over three months, parents started coming into the playground with skipping ropes and elastics, clapping songs and anything we felt the children would be interested in. Teachers sent home assignments targeted at getting parents to think about their childhoods and the games they played. They were then asked to teach these to their children so that they could come into the playground and teach other kids. We held several World Playdates at the school where parents and children demonstrated games to other parents and children. In the process, everyone had fun and it has started to make a difference.

“My son came home this week and he went up to my mom and said, "Sitho (means grandma) let's play a hand game." - Mother of child participating in the Playground Project.

"Thanks to you & your family Micheal for this initiative! It brought parents, teachers & children together on common ground (my inner child came out)” Parent

"...would love to say that it was the first time it was enjoyable to be on supervision at recess. I saw small groups of children in active play while incidentally learning so many social, emotional and motor skills. The older students were wonderful leaders and helped, in a non threatening way, to coach the smaller students in the games. Such a joy to see! It was a pleasure to be on supervision." Grade 1 teacher

Stay tuned for more stories about the activities and impact from the Playground Project.